Desert Storm: Why Running the World’s Toughest Race Will Make Me a Better Change Leader18 December 2019

In April 2018, I completed the ‘Marathon des Sables’ – widely regarded as the world’s toughest footrace. I ran a 250km ultramarathon through the blistering 50-degree heat of the Sahara Desert with all my food, equipment and clothing on my back. To cut a long story short, I had to run seven marathons in six days in an environment where humans are not supposed to survive.

I was hit by a vast number of changes in quick succession, and made me consider how I could use this experience to become a better leader and help people and organisations manage change more effectively. It would be tempting to write an article that included the usual clichés of ‘change is the only constant’, but – as usual – I wanted to do things a different way. 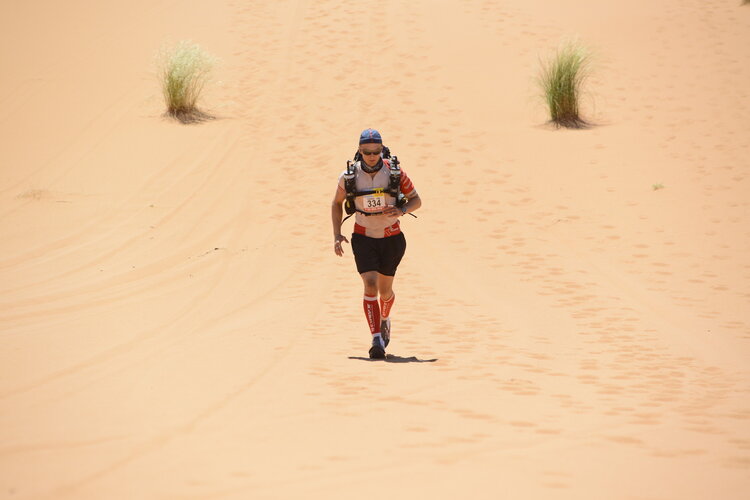 Here are the five slightly unconventional lessons that I’ll be taking back into the office:

1. Things Will Go Wrong.
When I was rudely awoken by a tornado ripping through our camp at 2am, collapsing our tent, knocking me almost unconscious and depositing 3 inches of sand in my shoes, sleeping bag, food and mouth, I realized that nothing runs smoothly.

You can have the best plan, most engaged stakeholders, agreed delivery timelines, the most polished PowerPoint decks…but something unexpected will still happen. It’s better to accept this is happening, look forward and adapt accordingly, rather than panic, blame, freeze or complain. Nothing worth doing is ever easy.

2. It’s Not About The Technology.
No phones, no laptops, no WiFi, no emails. I decided to ‘go natural’ in the desert and be without technology. Others had portable chargers, GPS watches..even a Kindle. But when this technology inevitably lost power, went wrong or stopped working, people started to panic. They were so absorbed and mortified that their GPS watch wasn’t tracking their distance that they lost sight of the ultimate vision – to finish the race and have an amazing experience at the same time.

It’s impossible to avoid technology in most of today’s Transformation programmes: AI, RPA, Digital Transformation, Cyber Security to name but a few. This is supported by increasingly advanced programme and financial management software. I’m a huge fan Technology Transformation, but it can’t replace the ‘hearts and minds’ aspect of the job. We can’t underestimate the importance of having a coffee with a stakeholder and talking them through our plan to get them on board, or physically walking a team through a journey of change and helping them get excited about what lies ahead.

3. The Quite Times Are Just As Important As The Loud Ones.
I had no problem being energized at the start line every morning. ‘Highway to Hell’ was blasting through loudspeakers and helicopters were flying 30ft above our heads. But I was at my lowest at 3am in the middle of the desert. I was in the middle of the ‘long day’ – a 56-mile double marathon that meant I had to run all day and all night without stopping. I was on my own under a million stars, dehydrated, hallucinating and blood was coming out of places it shouldn’t. Despite the great temptation to quit, it was overcoming moments such as these that defined my whole experience and will stay in my memory the longest.

Transformation programmes are always defined by the big events. We excitedly talk about the kick-off presentations, the go-live celebrations, the workshops, the Executive steering groups. These events are the ‘money makers’ where we get to go on stage, raise our profile and demonstrate the success and progress of the project.

But I don’t think we can make change happen just through the big, loud events. To really help people change we also need to think about the quiet times. What will stakeholders be thinking when they go back to their desks? What will they be saying about the programme when they are 1:1 with a colleague? On the journey home will they be excited about the role they are going to play, or deciding that they are just going to keep their heads down and not get involved? We need to consider these moments just as important as the big bang milestones, and understand what we can do to use them in a positive way.

In the darkest of times during the race, the only thing keeping me from a full physical and mental breakdown wasn’t the next big milestone of a finish line, but the small things like the next tree in front of me.

4. Focus On Your Strength, And The Strengths Of Others. 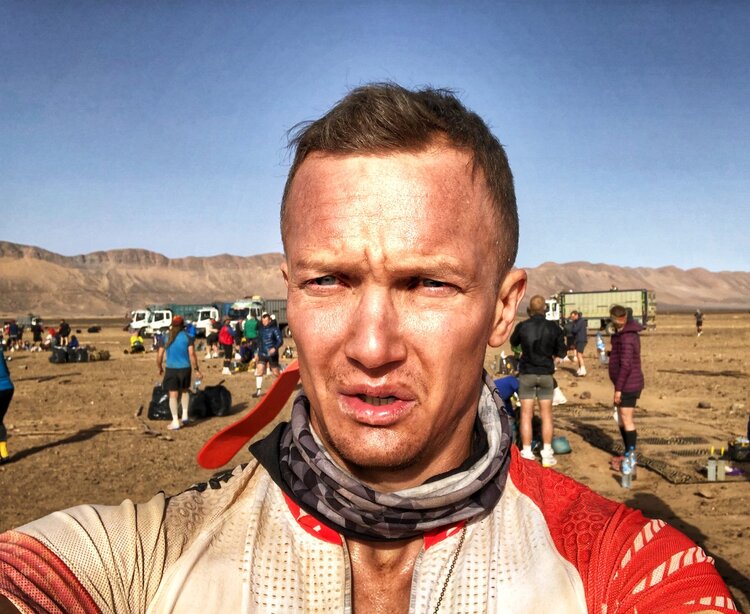 I’m not a runner. A few years ago the only running I would do was to run a bar tab. In my tent of 8 amazing people we all had different abilities and strengths. Some were bordering on professional athletes, others were just there to try and enjoy the experience. I learnt early on that I couldn’t beat myself up about not winning the race, or the times when I had to stop and walk. I had to remind myself that I had strengths that would help myself and my tentmates get through in one piece.

On large programmes it is sometimes difficult to put your hand up and say you’re not good at something. People take on a task, nod, say they understand and then quietly go back to their desks and put their head in their hands. Of course, I strongly believe in personal development and that if we are lacking skills in a certain area then it’s best to learn them, but people are always going to have different natural strengths. From now, I want to help people double-down on what they are great at. Ultimately I believe that this will help a team be happier, more productive and more likely to succeed.

5. Be Bold!
I lost count of the number of times that people said I was crazy; that I couldn’t do it; that it was OK to drop out; that maybe I shouldn’t have picked such an intense challenge that had sadly claimed lives in the past. If I’d listened to those people then my life would have been easier, I would be thousands of pounds better off, family members would still be talking to me and I’d have all my toenails. But I wanted to be bold…it was the world’s toughest race so I had to do it.

So many change and transformation programmes start with a bold, exciting vision…only to have that vision gradually eroded by stakeholder pressure, budgets, time, or fear. Then we end up with a programme that is….just the same as every other programme that the organization has tried and failed. Stakeholders shrug and say they’ve heard it all before.

I know that constraints are real. In today’s economic climate, organisations don’t have the money to do everything they would like, but I don’t think a lack of money or time can stop a programme being bold. Technology makes it easier and cheaper to stand out. Run a weekly podcast instead of sending an email newsletter; develop a simple App instead of running people through the same crumpled PowerPoint deck; break the world record for the number of people doing a Zumba class at the kick-off meeting. Bold doesn’t have to be expensive or complex, but it will be memorable. 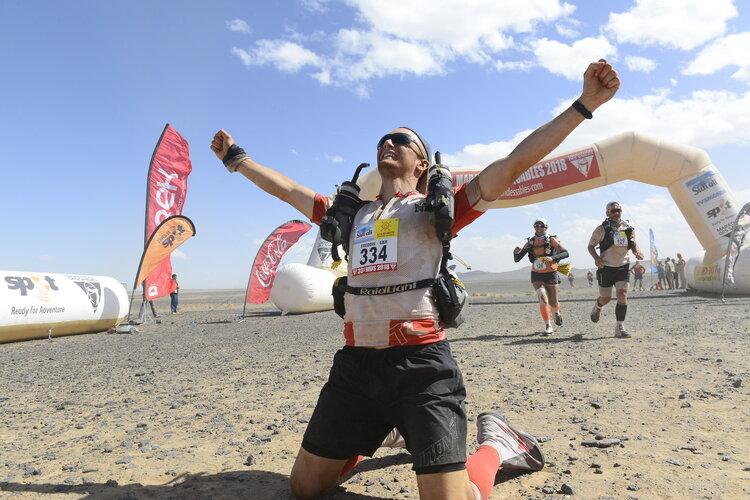 When I crossed the finish line, dropped to my kneed and collected my medal, I decided to take these lessons back to my colleagues and clients and try to make a difference. Maybe – as was a real possibility during the Marathon des Sables – I’ll get it wrong and it will all end in failure. And if it does then I’ll learn, grow and try something different.

If nothing else, they will help me prepare for my next adventure that is going to challenge me like never before.. 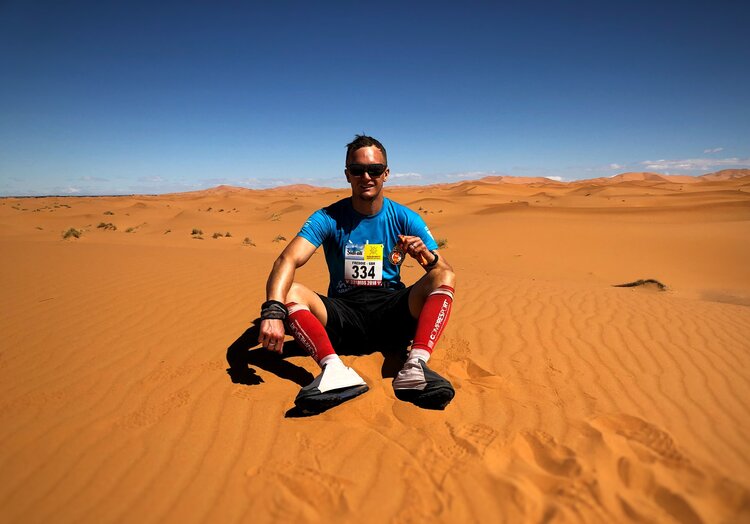